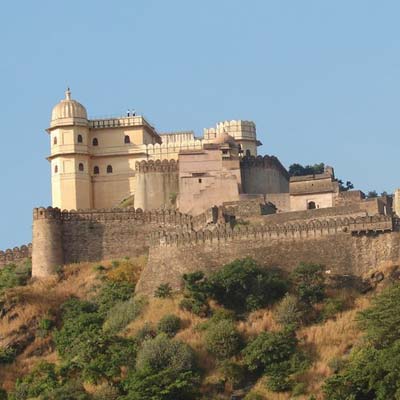 Kumbhalgarh is one of the finest examples of defensive fortification in Rajasthan. Kumbhalgarh is about 85 km from Udaipur. The Kumbhalgarh fort was the second most important fort of the Mewar kingdom after Chittorgarh. This fort is rising from a prominent ridge at a height of 1914 meters high from the sea level. The fort was built in 15th century AD by Rana Kumbha. This fort was built in 15th century AD by Rana Kumbha between 1445 and 1458 AD. The massive fort, encompassed by a 36 km long wall, has seven majestic gates and seven ramparts, one within the other which are ideal for nature trail. The Last gate-the 'Nimboo Pol' has fascinating chambers. According to history, the infant Udai Singh who later founded Udaipur, was smuggled from Bundi and was hidden in these chambers to save himself from his murderous intentions of his uncles. The fort has witnessed many heroic deeds of great warriors. This formidable fort fell only once to the army of Akbar and that too because the water supply was contaminated by the enemy forces.

Ranakpur Jain Temple was built during the reign of the liberal and gifted monarch Rana Kumbha in the 15th century. The basement is of 48, 000 sq. feet area that covers the whole complex. There are four subsidiary shrines, twenty-four pillared halls and eligibly domes supported by over four hundred columns. The total number of columns is 1,444 all of which are intricately carved with no two being alike. The artistically carved nymphs playing the flute in various dance postures at a height of 45 feet are an engrossing sight. In the assembly hall, there are two big bells weighing 108 kg whose sound echoes in the entire complex. The main temple is of Chaumukh or four-faces temple dedicated to Adinath. Later in the evening drive back to Udaipur.